Buruli ulcer (also known as Bairnsdale ulcer) is an infection of skin and soft tissue caused by the bacterium Mycobacterium ulcerans. The toxin made by the bacteria attacks fat cells under the skin, which leads to localised redness and swelling or the formation of a nodule (lump) and then an ulcer.

Although Buruli ulcer is not fatal, the infection can often leave people with significant cosmetic, and sometimes functional, damage to limbs.

Cases of Buruli ulcer have increased significantly in Victoria in recent years, particularly along the Mornington and Bellarine peninsulas, and the disease is spreading into new geographical areas. Over the past few years, Victorian scientists have been conducting intensive research in a search for answers around the puzzling aspects of this condition. Although it's understood that the infection is picked up from the environment, it's not yet known exactly how humans become infected with the bacteria, or where in the environment the bacteria prefer to live. It is not thought to be spread person-to-person.

The ‘Beating Buruli in Victoria’ project received its first National Health and Medical Research grant in 2018, allowing the collaborative partnership established between the Doherty Institute, Victorian Department of Health, University of Melbourne, Barwon Health, Austin Health, CSIRO, Agriculture Victoria, and the Mornington Peninsula Shire Council, to undertake ambitious and innovative research to better understand how Buruli ulcer is transmitted in Victoria, and to determine effective ways to reduce and prevent human infections.

Findings from an earlier case-control study conducted in 2004 on the Bellarine Peninsula showed that getting bitten by mosquitoes, as well as gardening, were possible risk factors for getting Buruli ulcer, while wearing insect repellent protected against infection. Further research, including laboratory studies and mapping the distribution of Buruli ulcer lesions in case, strengthened the evidence that mosquitoes might play a significant role in transmission. Earlier research has also shown that Australian native possums can be victims of Buruli ulcer too.

Last summer, the Beating Buruli project team designed a series of non-toxic mosquito reduction interventions to attempt to specifically and sustainably reduce local populations of Aedes (Ae.) notoscriptus, the container-breeding mosquito that is implicated in the transmission of Buruli ulcer (BU). The interventions did not include insecticide spraying, in response to community preferences raised in 2019. The aim of this pilot trial was to assess the effectiveness of this new approach in reducing mosquito numbers on the Mornington Peninsula.

The mosquito data provided a lot of important and useful information about mosquito population dynamics, Mycobacterium (M.) ulcerans transmission and mosquito dispersal patterns. However, the data did not show a reduction in mosquito numbers in the intervention zones compared to the control zones after the trial. 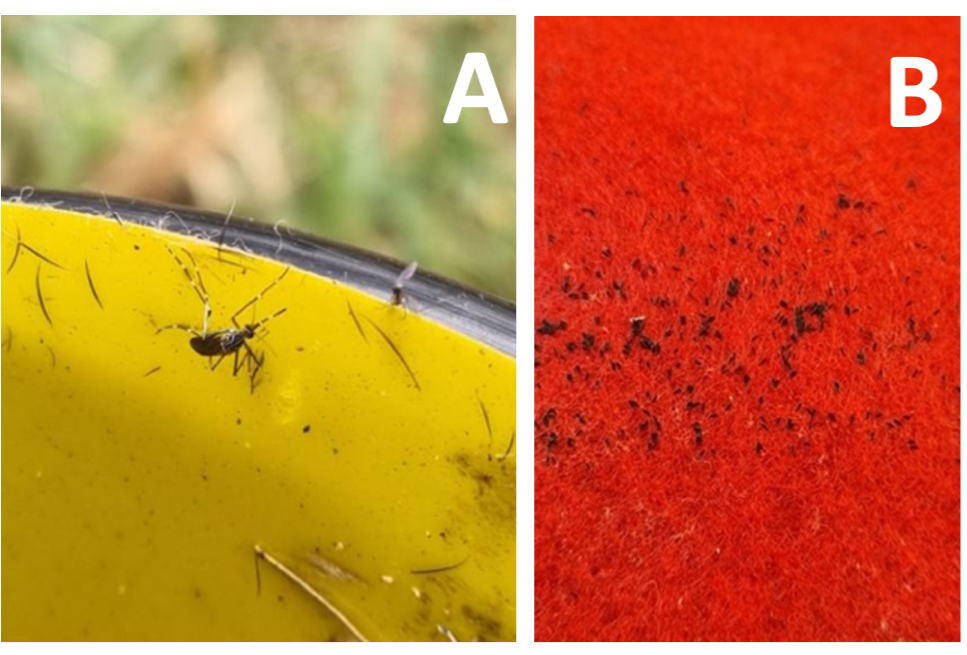 Figure 1: An Ae. notoscriptus mosquito caught on a sticky Gravitrap (A) and a close up of mosquito eggs on a piece of red felt taken from a monitoring trap (Ovitrap) (B).

The project team have re-assessed the study design based on the findings of the pilot trial, and have developed a modified and more localised (‘single-property-scale’) mosquito intervention to trial this summer (February–April2022).

The Beating Buruli team would like to express our thanks for the community support we have received during our intervention activities to date. We look forward to continuing to work with communities on the Mornington Peninsula and other endemic areas, and we remain hopeful that together we will be able to stop the spread of Buruli ulcer in Victoria and more widely.

If you have any questions about this research, or are interested in participating in the Summer 2022 intervention, please feel free to email the project team at beating-buruli@unimelb.edu.au. 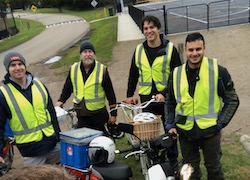